It’s been a light week for comics that I am actually reading. The only new issues to come out of note were the latest chapters of Marvel’s, frankly, incredible A.X.E. JUDGMENT DAY event. Which I might write about soon–or perhaps I’ll wait until it’s over. If you aren’t reading it because the Eternals don’t interest you (I do not blame you) you’re missing out. Gillen’s Eternals series essentially reinvents the characters and concepts and introduces just about everything you need to know. His new revelations make a clash with the X-Men inevitable and compelling. The Avengers are there for set dressing and the rare chance to dunk on Captain America. It’s a propulsive, dramatic story that asks philosophical questions through the vehicle of big superhero sci-fi action, and isn’t that what we read superhero books for? It’s why I do, anyway.

But we aren’t here to talk about A.X.E. Judgment Day.

My first draft of this week’s column included a review of Undiscovered Country #20 (which I did not like) before I discovered that it actually came out last month. I’m not sure how I got that release date so wrong. Anyway, Do A Power Bomb was a last-minute addition and saved this week from being a total wash, as I absolutely loved it.

I want to love this book. I love these characters. I like a lighthearted take on superheroes. This doesn’t work for me on any level.  It’s not a disaster, I’m not sure it’s even that bad, all things considered. But it just doesn’t work as a story about Cassandra Cain and Stephanie Brown as I understand these characters. In this book, they come off as inexperienced and klutzy, not at all how they should operate. It works better for Steph than for Cass, with Steph’s character often being so much about proving herself and learning to be a hero. But Cassandra is too…Normal. Too light and talks way too much. There is a moment where they use an emoji in a word balloon for Cass to capture her nonverbal reaction and communication that is inspired. But it’s undercut by how much she talks in the rest of the book. That’s a common problem with writing Cassandra Cain and it can sometimes go the other direction and she is too nonverbal.

This book radiates chaotic energy that I believe is intentional but is at odds with the leads.

That chaotic energy comes through in the art and the writing. The pages are crowded. With characters. With dialogue. The art is light and fun and suits the tone of the series, with a cartoonish and playful style. The colors are dynamic and electric, leaning into the trademark Batgirl purple. It presents Gotham as a neon playground for the book’s young heroes. 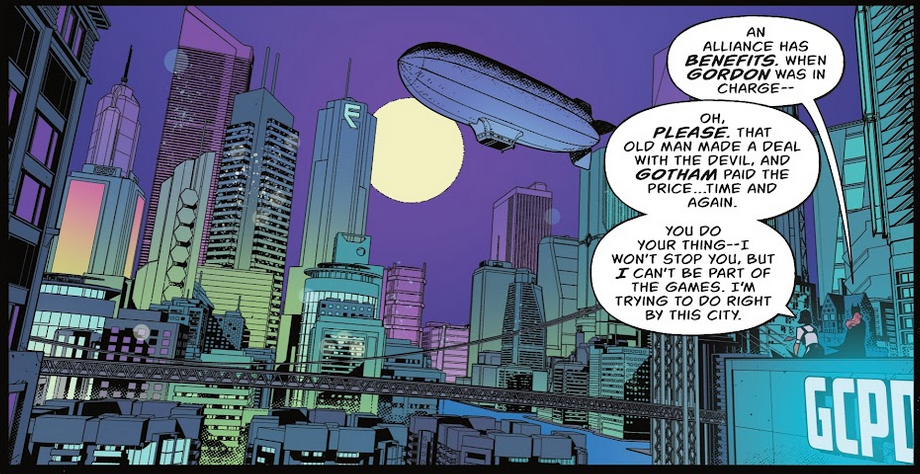 The thing that I found strangest was the way the narrator was presented. It’s a winking, sarcastic omniscient narrator that pokes fun at the story itself. Instead of coming off charming, it took me out of the narrative and it was largely unnecessary. It felt less like winking at the fans and more like talking down to the reader. It doesn’t take its own story or characters seriously.

I like the general idea of this book– the three Batgirls working together with Barbara mentoring Steph and Cassandra. That’s a good hook and there are a few moments it works well. The scene toward the end, where they are all in the loft just hanging out gives the characters a sense of shared history and clearly illustrates how the three relate to one another. I also liked Steph cracking a cipher and solving a puzzle, using her dad’s Cluemaster skills for good.

Also–am I missing something with Renee Montoya being so anti-Batman? Was she always like that? It seemed a weird character beat to me but maybe I just don’t know Montoya well enough.

One more thing, since we’re talking about Stephanie Brown. The new costume is bad. She is not hiding her identity at all.

Maybe if I had been reading since issue 1 I’d have a better sense of this book’s point of view and the heart of its premise, and the tone would click better for me. Or maybe this one just isn’t for me. That’s OK.

I have no complaints about how Killer Moth is used here, though.

I expect only one thing from a book called Godzilla vs. Power Rangers, and it’s not high art. I expect Godzilla to fight the Power Rangers.

Well, we certainly get that. So in that sense, this issue delivered.

Williams does some impressive layouts to fit the giant monsters and giant robots in a page. Every page is visually compelling and it’s quite an accomplishment.  He leans into the vertical axis, emphasizing the length of the figures. The judicious use of double-page spreads makes the most vicious moments of the battle have real visceral weight given how most of the pages emphasize the up-and-down. The addition of the left-to-right gives those two-pagers a real sense of the weight of these powers crashing into one another.

Unfortunately, the entire fight seems to take place in a desolate void. Without any objects to provide a sense of scale, you can’t appreciate the size of the Megazords or the monsters, which is half the fun. I wanted to see Dragonzord smash some buildings. It’s a bit disappointing though I am sure just drawing these pages full of monsters and robots was already a tough job. There’s already so much packed into these pages that adding much more may have also made the pages too crowded. But a few establishing shots would have helped—you can cheat background details in a comic in a way you can’t in other mediums. Just having them at least in rubble or even seeing Godzilla towering over the Green Ranger before he gets back in the Dragonzord.

Even though you don’t expect much in the way of a story in a book like this there doesn’t seem to be much here at all. Since this is the last issue I’d expect some kind of story resolution but instead, the fight just stops and the Rangers go home. What did they learn? What did Godzilla’s presence teach them?

This series is probably a fun diversion but seems to lack the spark that made Williams’ Batman/TMNT or the JLA/Power Rangers crossovers work so well.

I’m a big fan of Daniel Warren Johnson despite not having read his first major debut, Murder Falcon. He first caught my eye on Twitter when he began sharing his screen-tone-heavy, messy-inked con commissions of Star Wars fighters and dope action scenes. Few in the game are as capable of drawing dynamic action and filling a static page with a sense of motion as DWJ.

Despite my love for his artwork I was not super into the idea of this book. I read his Beta Ray Bill over at Marvel and while the fights and artwork were, predictably, incredible, I found the story not entirely compelling. And I have no interest in Professional Wrestling whatsoever. My understanding of this book was that it was about pro-wrestling so I passed on it completely. Opening this book and seeing that first page with a fantasy knight preparing for a universal cross-time wrestling match? Now THAT I can get into.

Do A Powerbomb  is like Ultimate MUSCLE meets Rocky with a splash of Dragonforce.  You can all but hear the killer guitar riffs and melodramatic fantasy lyrics. There is an earnestness to the story–an old man finding his fighting spirit again in the daughter of his deceased former partner–that gives the over the top action and intergalactic fantasy-sci-fi a human groundedness. Even the enemies, the medieval knight wrestlers, are given human motivation. It’s all wrapped up in a delightful sense of humor and Johnson’s incredible choreography and mastery of motion.

What I admire about Johnson’s work is his complete lack of fear in getting messy with his layouts and lines. Heavy blacks fade out into jagged brush strokes, sound effects spill over the panels, stray brush strokes break fall off the figures, and insert panels bust in with electric borders. His motion blurs are not just clean, fluid lines but weighted, idiosyncratic waves of black.  Black splatters pepper the backgrounds. It feels handmade and adds to the underdog charm of (who I presume to be) the protagonists. There’s a clear manga influence in how he approaches his fights.

Rus Wooton’s letters are a great complement to Johnson’s inky art. The word balloons are imperfect and the actual words look hand scrawled. Once in a while you’ll get a book by a distinctive artist with letters that look obviously made in a vector art program and the dissonance pulls you out of the book completely. Here the whole package works together. The same goes for Mike Spicer’s colors. He doesn’t over render the colors with flashy effects or over-the-top shading.

We get enough here through dialogue, action, and body language to understand our characters, their background, and the stakes of winning–or losing– the tournament. And it’s done without laborious exposition or mystery box teasing which is an worn out storytelling trick particularly among creator owned books.

I’m looking forward to diving into the first 3 issues.