In Image Comics Radiant Black #1, Nathan Burnett is a thirty year old screw up who is too scared to pursue his dream of being a writer. He returns to his boyhood home in small town Illinois to live with his parents and dig himself out of crippling debt. While there he is reunited with an old friend who pushes him to open up about his fear and failure for the first time. After a night of drinking beer and catching up with one another, the two stumble upon a strange glowing black sphere on the train tracks. After touching it, Nathan is encased in a sleek alien suit of armor and suddenly finds himself with new powers that, so far, seem to allow him to levitate items as large as a train and fly through the air.

A millennial superhero with something to prove, Nathan’s generational downward mobility leaves him lost and his grand dreams of the future out of reach. It’s a familiar sorrow for many of us who came of age in the years following one of the worst economic collapses in American history, only to be met with a new economic collapse just as we thought we were starting to get a handle on adulthood.

It is a winter of the soul, the hopeless and cold isolation of early adulthood failure that is reflected by the snowy winter setting. 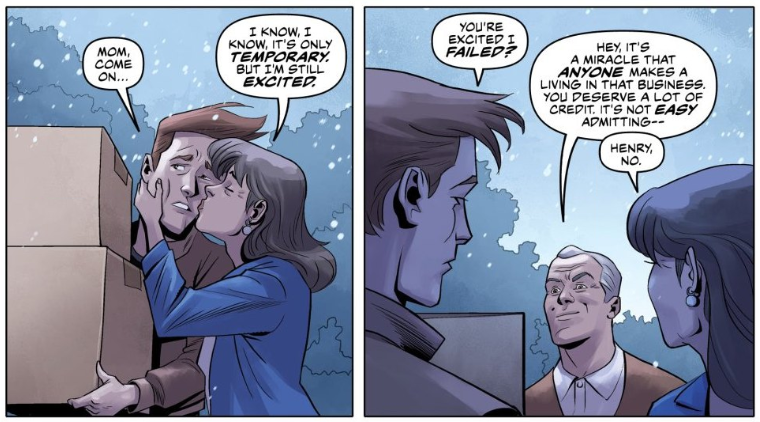 Radiant Black’s first issue is a methodically and slowly paced debut for a superhero comic. There is no major fight scene, only a single page reveal of a villain toward the end of the issue. Instead, writer Kyle Higgins takes his time introducing us to our hero, the people in his life and his emotional struggles. It is a not altogether unfamiliar set-up, a youngish guy struggling to make ends meat. But what makes this interesting in particular is the place in life the hero finds himself, an existential morass that is of the moment and largely unexplored within the genre.

Nathan is motivated to utilize his powers not out of vengeance or tragedy, but to prove that his life has value, to make something of himself and make a difference in the world. It’s a guiding sentiment for many people I know in our early 30s, a desire for our careers and actions to add something to the world, to somehow make things better for others. The ideals of youth and the crashing reality of the social and economic forces stacked against us are a painful, near-daily struggle. Nathan is given a chance to escape the spiral in which he finds himself, the rare opportunity of having real power and influence with which he could do something good–really good.

Higgins’ story is elevated by the sleek art of co-creator Marcelo Costa. Channelling Japanese Toku and Sentai designs, the shiny black costume for the main character is sleek and instantly appealing. Higgins has admitted the influence of Japanese series on his concept, and it certainly shows in the approach to the introduction of the hero. In Kamen Rider, the heroes are afforded opportunities to be clumsy and vulnerable in and out of costume. In Radiant Black, Nathan vomits through his helmet after the shock of his first transformation.

Costa’s art smartly avoids the temptation to have Nathan suddenly transform into an imposing figure flexing for a pin-up in every panel, but instead ramps up the character’s awkwardness. The only overt superhero reference is to Mike Zeck’s cover to Secret Wars #8, which debuted Spider-Man’s black costume. Hardly a triumphant pose. 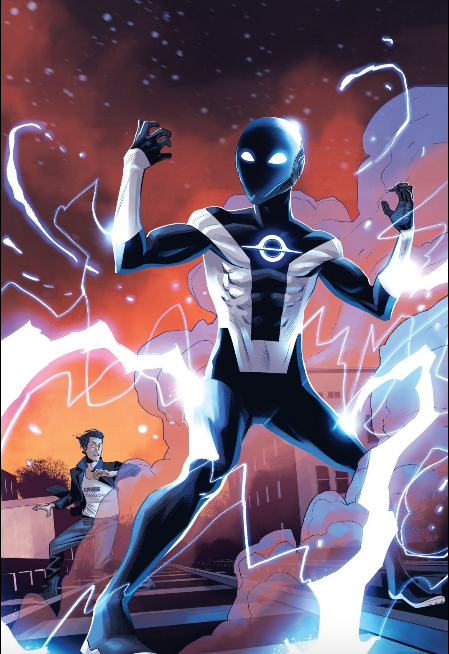 Costa does an excellent job keeping the characters grounded, expressive, and relatable. His visual storytelling is also top notch, showcasing some subtle panel work that nonetheless illustrates his command of the medium. A sequence of Nathan’s friend Marshall examining the black hole that bestows Nathan with his powers and observes that it “looks the same from every angle” helps to illustrate the character’s point that would not work nearly as well with different layout choices. 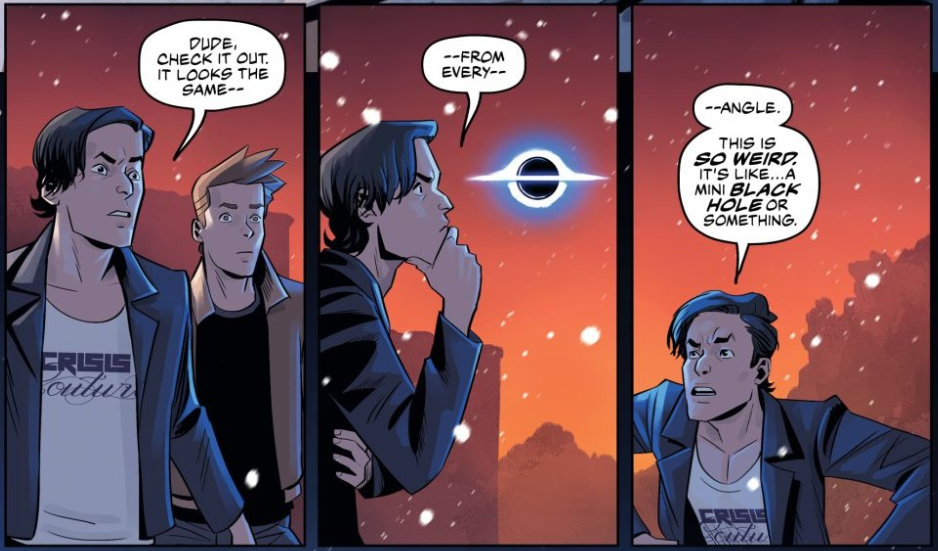 When Nathan first transforms, the panels explode and crackle with energy, the emotion and increasing anxiety of the moment heightened by the thumping rhythm of the horizontal panels. The colors are vibrant, with strong blues and oranges that keep the issue bright and the tone light even as the character grapples with the weight of his shattered expectations for himself.

It signals that this series will avoid easy indie-comic conventions of overt darkness, instead keeping the spirit of Higgins’ run on Power Rangers–An empowering action adventure with real emotional weight.

The personal essay the writer shares at the end of this first issue acts as a bit of a mission statement for empowerment, inclusivity, and hope central to his affection for superheroes.

Costa also does a strong job keeping a dialogue heavy issue moving and balancing a high word count with expressive characters. What small hints of action we do get here is exciting and snappy, and I look forward to the opportunity to see Costa really let loose.

I’d be remiss if I didn’t mention the sleek logo design from Rich Bloom and stellar book design by Michael Bustulli, both of whom help make this comic eye-catching and the whole package of the book stand out from the very beginning. Michael Cho’s bright cover is instantly iconic.

Radiant Black issue 1 is a fun debut issue that promises to explore the superhero genre from a unique angle while tapping into the generational anxieties of the moment. The inclusion of iconography and tropes from Higgins and Costa’s Toku influences inject the title with a unique flavor that is fresh and exciting.

View all posts by Urbane Turtle